With most events still banned in Beijing, the capital’s diverse restaurants, bars and entertainment venues continue to create new ways for us to have fun at home. An exciting event awaits you this Saturday from nugget in the form of an online music festival: Nugchella.

Ahead of this Saturday’s show, I caught up with nugget co-owner Jen Rao, who is currently in Guangzhou where she is leading the launch of nugget’s new location (more on that in the near future), to talk about the upcoming festival.

First the name: Nugchella. Jen told me it’s supposed to be “very tongue-in-cheek,” which started out as a tongue-in-cheek joke but then stuck as it ended up being pretty catchy. I for one am a fan of puns. Although the Chinese name is much more literal, it is simply 小块儿线上音乐节 Xiǎo kuài er xiàn shàng yīnyuè jié (Nugget online music festival).

Nugchella takes place on June 4th at 18:00 and you can tune in for the super cheap price of only 5 RMB. It features nine of the bands that Jen tells me are “Beijing’s best and what we think are very exciting bands,” one of which is Gilded Forest, the latest project from fellow co-owner David (Dave) Carey. Some of the featured bands have worked with Nugget through Nugget records, others are just the ones they really love or great bands their friends are in.

Of the bands that perform, Jen says Summer Vapor, a Chinese indie pop band, is the biggest band they’ve worked with and is just “really, really amazing.” You can see all featured bands on the poster and the full line-up on their WeChat account (小块儿唱片 Xiǎo kuài er chàngpiàn). 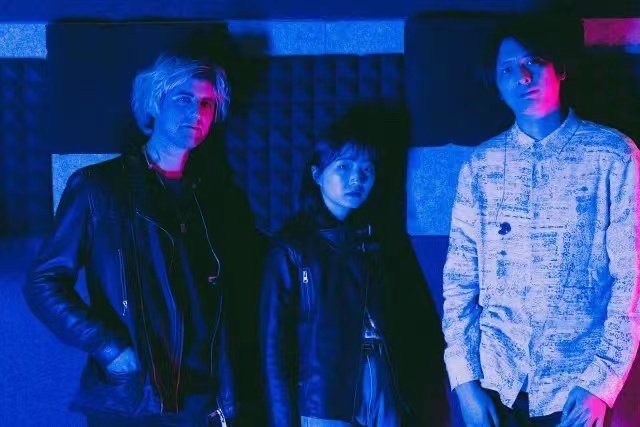 The livestream event lasts around six hours and runs until midnight with an approximately 20-minute break between each band to create a “full music festival style”. Where the idea originally came from, Jen says they’ve been “working on this online music festival for a while since lockdown started in May.

Obviously live streaming has become new for a lot of music venues and for a lot of clubs so we wanted to create our own version of it, but of course as a nugget we always try to do things our own way. So instead of having a full live broadcast where the musicians play or the DJ plays and then a phone records the content and it’s instantly streamed to an audience, we pre-recorded and then edited the content to make a kind of short film/ to create a music video.” 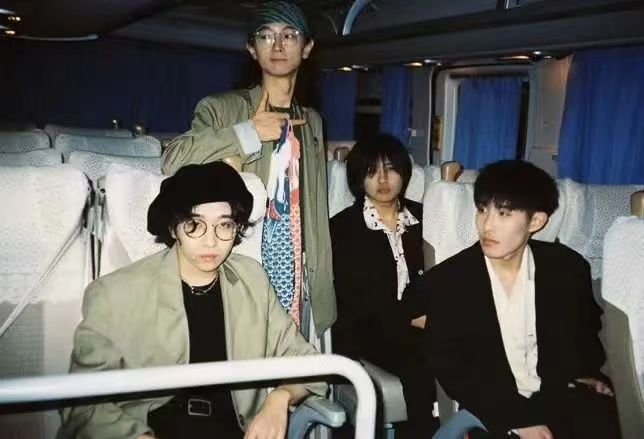 Thanks to a newly installed soundproof door system that essentially creates an airlock, they “could have whole bands come and perform in the room, ones we couldn’t fit before, and that was really exciting.” Anyone who’s a nugget regular knows the ongoing issues they have with neighbors. So with the new door system, nugget can do a lot more in the space when things reopen without worrying about disturbing the neighbors.

The sets that will be featured at Nugchella were all recorded by local videographer Tabris and the sound recording was done in-house using nugget’s system, with the videos finally being edited by Dave. Jen says the goal was to “essentially try and make [the videos] really moody and blurry to create a very atmospheric vibe of that nugget feel with the blue neon.” She adds, “We’re pretty proud of the work we’ve done.” Rather than just livestreaming, Jen says , they wanted to “push it more as a festival as opposed to a live stream just because it’s a little bit different and it’s more of a curated showcase of all these artists”. 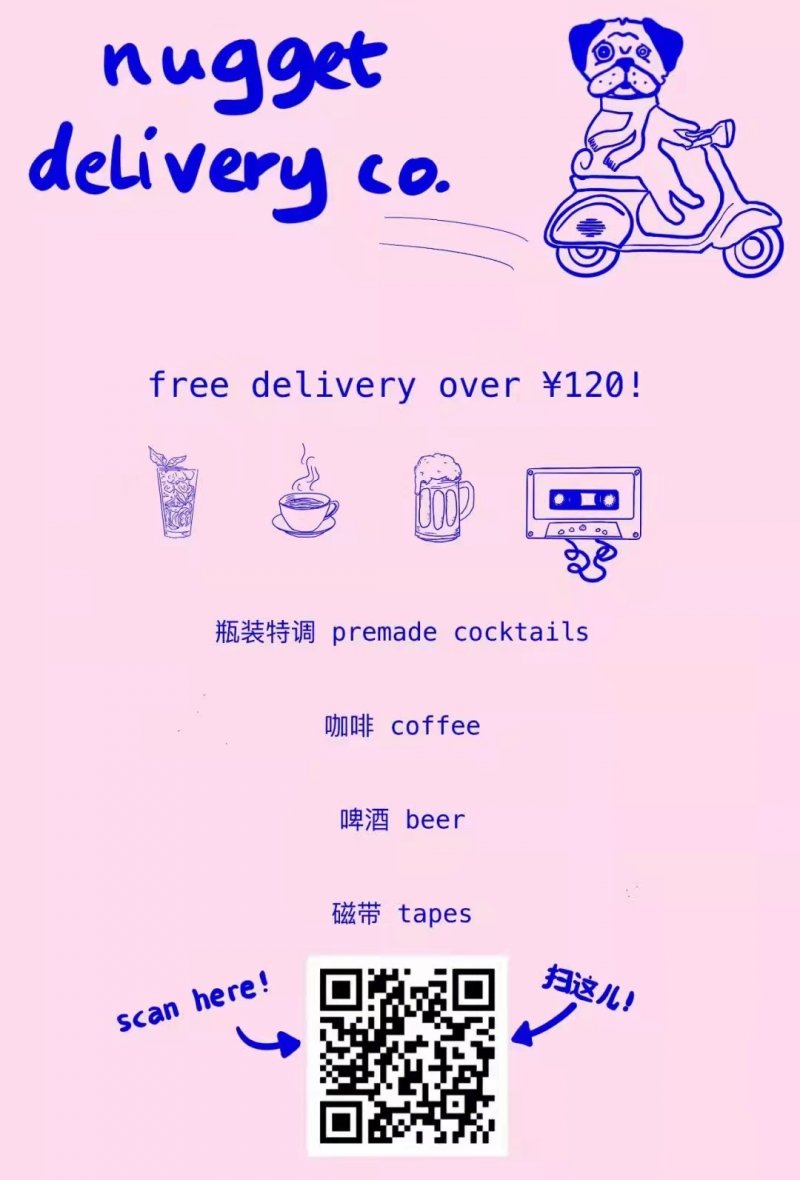 In these times it’s more important than ever to support these small, independent businesses, and when you can watch and listen to great music at the same time, that sounds like a pretty good deal to me! Plus, there’s a good chance you’ll be the closest you’ll ever come to a music festival, so you really shouldn’t miss Nugchella. If you want the whole nugget experience, why not also order one or two of their signature cocktails from their Weidian shop to sip on while enjoying what is sure to be an amazing show? 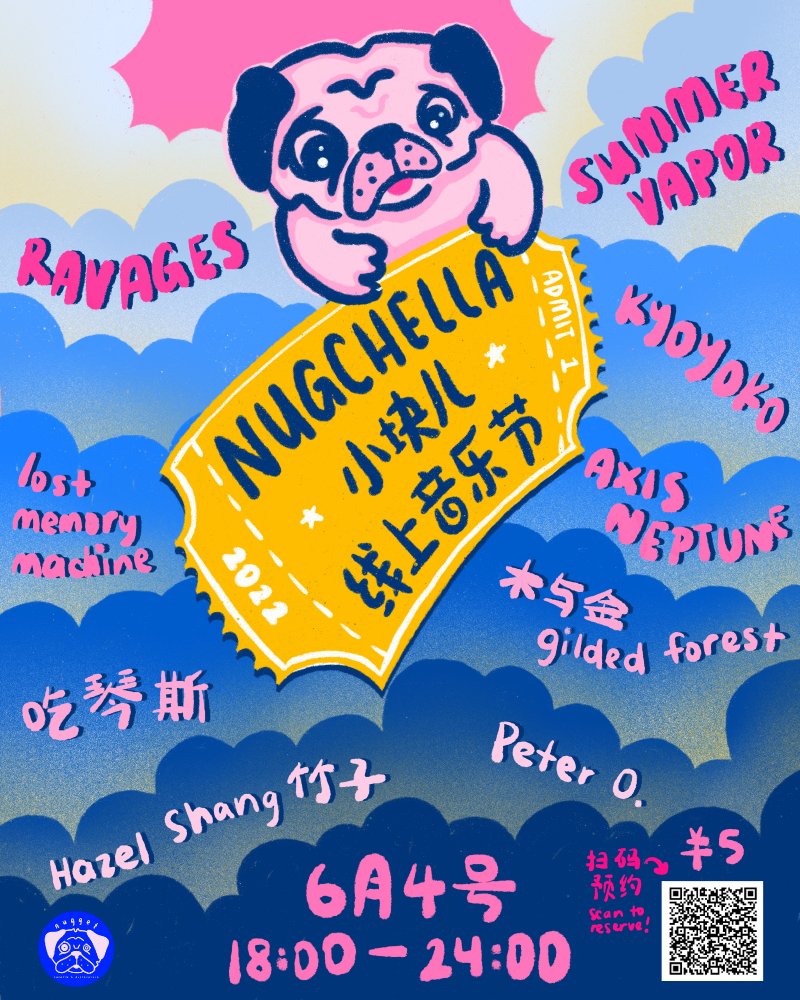 Nugchella takes place on June 4th at 6:00 p.m. Scan the QR code on the poster above to reserve a seat. When the live stream starts, viewers need to pay 5 RMB to access the live room.