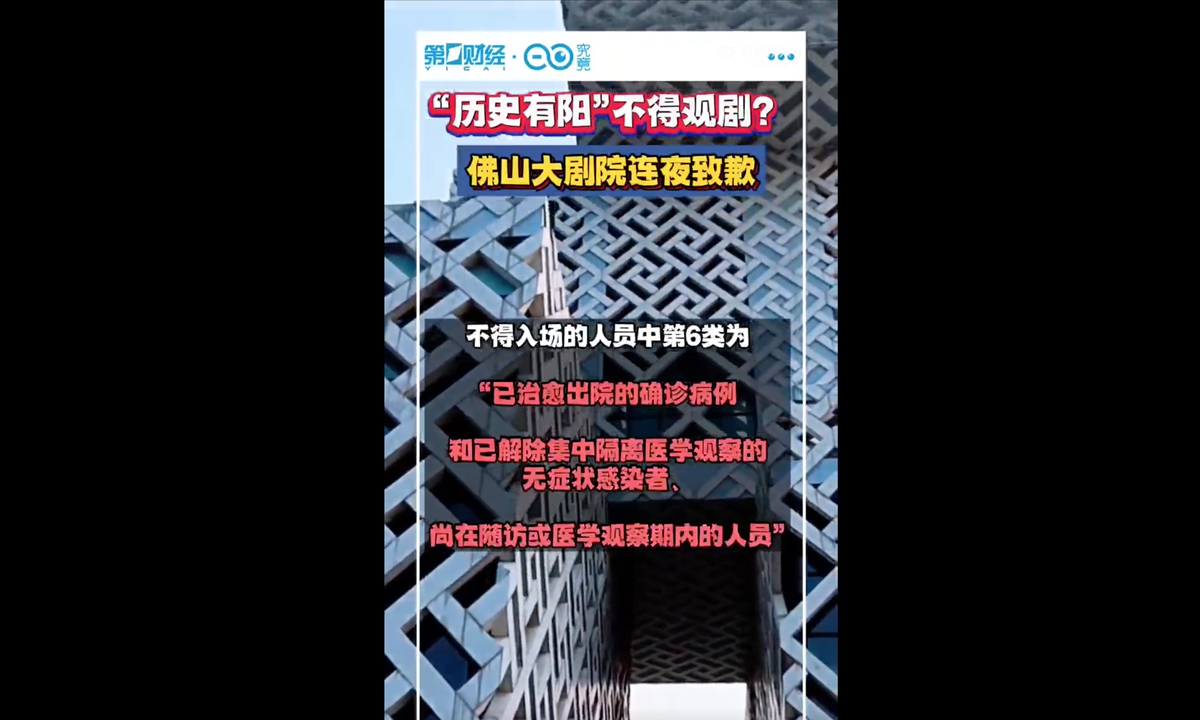 A theater in south China’s Guangdong province issued an apology on Tuesday and said it revised an admissions notice that banned entry for visitors once infected with COVID-19, amid an outcry against discrimination.

The notice, set out in its July 8 revised terms, that recovered confirmed patients discharged from hospital, asymptomatic infections discharged from central quarantine and personnel still under follow-up care or medical observation are not allowed to enter of the theater are prohibited.

According to media reports, the regulation was also included in the theater’s approval notice, which was published last December. Apart from that, people with 10 abnormal symptoms including fever, dry cough, fatigue, loss of smell and taste, nasal congestion, runny nose, sore throat, conjunctivitis, muscle pain and diarrhea were denied entry to the theater in the notice last December.

Amid the outcry against discrimination, the theater updated the admission notice around Tuesday noon, stating that confirmed patients and asymptomatic infections who have been cured and discharged from the hospital and are still under home health surveillance are barred from entering the theater.

Although the Foshan incident was an isolated case, the difficulty of job-hunting for people in Shanghai with a history of COVID-19 infection has also drawn public attention.

Articles about workplace discrimination against recovered COVID-19 patients have been circulating online these days, with many Chinese media reporting that job postings from certain companies indicated they would not hire candidates with a history of infection.

An article that went viral on Monday revealed a recovered COVID-19 patient was living in a public toilet at Shanghai Hongqiao Railway Station after failing to find a job.

Her difficulty finding a job is a direct result of suspicions that recovered patients are testing positive for COVID-19 again.

In fact, the updated ninth edition of the COVID-19 Prevention and Control Protocol, released on June 28, stated that even if the recovered patient has respiratory symptoms or not, he should not be placed under management or that his close Contacts should not be adjudicated if their cycle thresholds (Ct) of nucleic acid tests are 35 or greater.

Regarding whether recovered patients from COVID-19 are contagious, Jiao Yahui, director of the Medical Administration Office of the National Health Commission, said in March that clinical studies have shown that in COVID-19 patients, the recovery process progresses to Ct value 35 or higher, no live virus can be isolated from their samples, meaning these patients are no longer contagious.

Hu Bijie, a member of the COVID-19 medical treatment expert team in Shanghai and director of the infectious disease department at Zhongshan Hospital, affiliated with Fudan University, also pointed out in April that experts have found patients have recovered who have tested positive again or who have been reconfirmed with COVID-19 have not infected others or caused transmission.

Responding to public calls about the situation, the Shanghai government stressed at a press conference on Monday that employers should not fire or refuse to hire employees based on previous COVID-19 infections following media reports of workplace discrimination.

As of press time, the job seeker who stayed at Shanghai Hongqiao Station has found a job at a courier company with the help of many people.