That’s what happens when a beloved kid-friendly character goes public, we convert them into movies like Winnie the Pooh: Blood and Honey and the Hundred Acre Wood we remember will never be the same 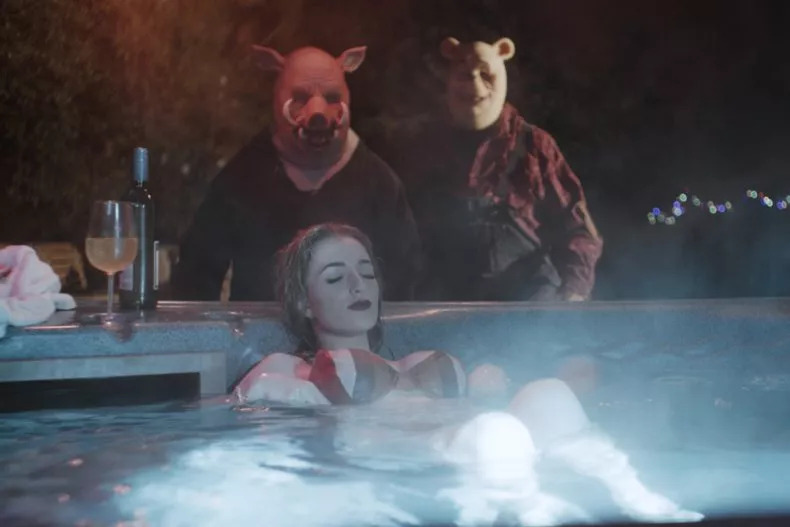 Details on this Winnie the Pooh Scary Flick

According to IMDB, the chilling flick was written and directed by Rhys Frake-Waterfield. The upcoming film stars Maria Taylor, Chriss Cordell as Piglet and Amber Doig Thorne. So far not much has been revealed about this teen movie which is being produced by UK-based Jagged Edge Productions.

Synopsis for the film – “It follows Pooh and Piglet as they rage after Christopher Robin abandons them.” The film is a chilling retelling of the legend Winnie the Pooh.

WHAT THE HELL?! WHO WATCHED/READ WINNIE THE POOH AS A CHILD AND THOUGHT “You know what? This is going to be a riveting horror movie one day”?! https://t.co/cVUEfL2Qq6

In an interview, the director/writer revealed that “Christopher Robin is being pulled away from them, and he’s not [given] the food, that made life pretty hard for Pooh and Piglet” while he goes to college.

“Because they had to fend for themselves so much, they essentially went wild,” he added. “So they went back to their animal roots. They’re not tame anymore: they’re like a vicious bear and pig that want to run around and try to find prey.”

The first look pictures of the horror version of ‘Winnie the Pooh’ have been revealed and it’s absolutely right that fans are concerned. According to Dread Central, the horror makeover of our beloved childhood character is an upcoming indie horror film that will cast a completely different light on the famous bear and his piglet sidekick.

Four weeks ago, the production house broke the news of the start of filming on WINNIE THE POO: BLOOD AND HONEY. The first glimpses from the film look terrible indeed.

What paved the way for this horror version?

After going through the first look, we wonder how is this even possible? But this animated version of the adorable bear we’ve seen in Disney cartoons has now been transformed.

The original 1926 novel, written by AA Milne, only entered the public domain that year, and now, much like Sherlock Holmes or Robin Hood, Pooh can have his own versions, so long as the story elements or characters added were or belong to Disney, they are not used in the adaptation.

Disney has owned Pooh since 1961, but since the novel entered the public domain, screenwriters have been able to create their own stories featuring this lovable child character.

Ever since the first look pictures were unveiled, fans have taken to Twitter to express and comment on how divided they were over this horror version.

Winnie the Pooh is being made into an R-rated horror movie. Yes, really.

That’s why I love the public. pic.twitter.com/ZuEWwZ7WJg

Not everything needs to be manipulated in the entertainment industry…. Making a horror movie out of Winnie the Pooh??? is nothing sacred???? pic.twitter.com/SzlVrNNohB

Another also wrote: “Winnie the Pooh was my childhood too. I have mixed feelings but I would watch it just to make fun of it.”